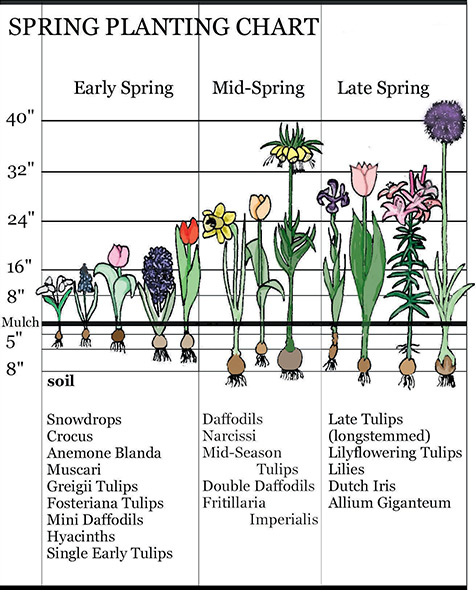 Spend time planning before planting bulbs in your landscape. Sketch the plan on graph paper before purchasing bulbs. This planning will assure that the proper number of bulbs are purchased. Since the foliage of spring-blooming bulbs dies by early summer, this plan will provide a record of where the bulbs are planted in case annuals or perennials are mixed in later.

As you develop your plan, keep in mind that bulbs bloom at different times. Some spring bulbs have overlapping bloom periods, but they still maintain the order in which they bloom. Spring bulbs will open from early February to mid-June. Summer bulbs will bloom from early summer to fall.

Following is a general idea of various flowers bloom sequence. These bloom cycles are for general reference. The following sequence depends a great deal on the weather in your area as well as the variety of bulbs you plant. To see a sample of the bulbs that grow during each bloom cycle, use our filters on the web site to sort by bloom time.

You likely know which bulbs are planted in fall and which to plant in spring. But by doing a bit of bloom-time planning, you'll achieve a nonstop display of colour from early spring through summer just by using easy-to-care-for bulbs!

Snowdrops: Snowdrops, or Galanthus, are often the first blooms to appear in spring - and they're a great choice for areas that stay cool a bit later in the year. These short-statured plants with small white blooms are incredibly hardy, and most flower before the last day of winter!

Snow crocus: The early-blooming varieties within the Crocus genus produces small flowers, with a longer blooming season, than giant crocuses. They'll start blooming in late winter, and can flower in colours of pink, purple, yellow, white, or even blue, depending on variety.

Early snow glories: Glory-of-the-snow, or Chionodoxa, are another "northern" plant that can actually perform well in both northern and temperate climates. These fabulous blue star-shaped flowers are among the earliest flowers you'll see each spring. They're also great for naturalizing in yards or flower beds!

Giant crocus: Just like smaller species of crocus, giant crocus are great for naturalizing. Plant a drift of giant Dutch crocus of a single colour or mix colours for a more natural effect. Their larger flowers (usually 10-15 cm in height) provide a lovely, low-growing pop of brightness.

Trumpet daffodils: Trumpet daffodils are the classic daffodils, with cups longer than their petals. They feature a single flower per stem and are very hardy - and bloom soon after the snow melts!

Hyacinths: Jewel-toned hyacinth flowers bloom in dense spikes and are among the brightest colours you'll see in early spring. They're often associated with Easter celebrations, and some gardeners "force" the bulbs to bloom in indoor pots for spring decor.

Tulips: Mid-season-blooming tulips include jumbo varieties and Apeldoorn, Triumph and Darwin tulips. Many of these make up the traditional Dutch tulip fields and are great for planting in large, multi-coloured drifts. Darwin and Triumph tulips are hybrids bred for exceptionally long bloom times--they may last for a month or longer!

Late season tulips: Late-blooming tulips include some of the fanciest and frilliest flowers: ruffled parrot tulips, peony-flowering double tulips, and some late Triumph varieties. The bright colours of these unusual flowers will put you in the mood for summer.

English wood hyacinth: Sometimes called Spanish bluebells, these plants produce spouts of dangling, bell-shaped flowers. Plant in patches or along the back of a bed to add a bit of mid-height interest. They're very deer-resistant, too!

Asiatic lilies: Asiatic lilies are the earliest bloomers of the lilium family and the easiest to care for! Several types of asiatics--from single-bloom standards to short and spunky border lilies to multi-coloured tango lilies--are available to bring your spring garden into bloom. .

Dutch Iris: Among the most popular perennials in the late-spring set, bearded Dutch irises grow in a vast variety of colours--and it seems new varieties become available every season! Dutch irises grow from rhizomes and come back year after year. They're a great "stand alone" planting or can be mixed with other tall flowers for a garden with heightened style.

Alliums: Another high-rising late-spring bloom, alliums feature a single star-shaped or "pom-pom" bloom per stem. These whimsical flowers can be a bit tough to find at big-box stores, but they're worth ordering online or by mail!

Hardy gladiolus: The corms, or roots, of hardy glads are a bit less tender than those of traditional gladiolus plants - so, they can be planted in fall in zones 5 and warmer. Glads grow large spikes of big, brilliant flowers, and hardy glads are so easy to grow!

Mountain bells: Mountain bells are actually a low-growing allium variety. Perfect for borders or rock gardens, these short plants sprout hundreds of yellow, white and purple flowers every spring. Just like tall alliums, mountain bells are very resistant to deer and other animals!

Anemone: It's hard to resist the cute, stocky flowers of Ranunculaceae, or anemone plants. They're quite hardy and can be planted in fall. In spring, you'll see prolific blooms in shades of red, blue, violet or white. Some anemone varieties look similar to poppies - making them perfect for the poppy-loving gardener who wants a carefree plant! Others have small, daisy-like flowers. Anemones are sometimes called windflowers.

Japanese iris: Beardless irises bloom alongside their bearded cousins in late spring. Iris ensata, or Japanese iris, along with Louisiana and Siberian iris species, are low to the ground, and feature fluid-looking, butterfly-shaped petals. These relaxed flowers add a touch of elegance to any bed or planting.

Daylilies: Daylilies bloom at the same time as Dutch irises--and just like irises, there are hundreds of cultivars in dozens of colours, shapes and textures! You'll find daylilies (hemerocallis) in shades ranging from classic red to pastel pink to neon green. Look for candy-coloured daylilies with beautifully-hued centres or piped edges. Try short dwarf daylilies, or big and bold double-flowering varieties. Many daylilies are rebloomers, meaning that you'll get a second round of flowers later in the season.

Oriental Lilies: These fragrant lilies bloom near summertime, and include such classic flowers as tiger lilies, stargazers and, of course, the standard white Oriental lily. Try staggering Oriental lilies with earlier-blooming Asiatic lilies for a nonstop show running from late spring through early summer!

Gladiolus: Glads bloom just at that point of late spring when the weather turn toward the tropical. These big and beautiful flower spikes work well when arranged in a variety of colours - bright Glamini glads have become particularly popular.

Dahlias: From miniature dahlias to oversized "dinnerplate" types, dahlias have taken over American gardens in recent years. Dahlia tubers are planted in the spring, and bloom in summer. These high-impact flowers grow in a rainbow of colours, and, increasingly, you'll find massive flowers with amazing patterns. A great way to add a touch of whimsy to your garden!

Begonias: Begonias are one of those quintessentially summertime flowers. Hardy begonias, unlike the annual begonias sold in many garden centres, will bloom year after year. Many constantly blooming varieties will flower for several weeks or months. Try cascading begonias for the perfect hanging basket, or plant frilly, double-blooming begonias to add texture to a bed.

Canna: Cannas bloom in August or even September in some regions - making them excellent fillers for the post-July fade that may happen with other flowers. Cannas' tall stems sprout vivid, tropical flowers, and their foliage is glossy, too. They're a great way to wind down the growing season!

Crocosmia: Don't let their short stature fool you: fiery crocosmia flowers have a big impact in the garden. These red- or orange-coloured blooms add a lovely pop of energy to beds or borders, and their presence won't go unnoticed by butterflies and hummingbirds!

About Bulbs: Winter Flowering Back to Index Landscaping with Bulbs: Colour