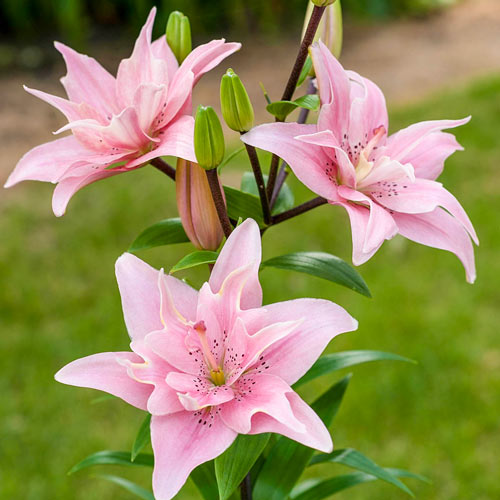 Read Reviews  |  Write a Review
Price $42.99 Packed 5 per package
Availability: Out of Stock
sku # 82939
Out Of Season We ship this item in Fall at the proper planting time for your hardiness zone.
Oops, there seems to be an error, please re-enter your email address.

We have received your request. You will be notified when this product is in stock.

Plant hardiness is very important to growing success. Check the map below to determine which hardiness zone you live in. You'll find zone designations at the end of many of the plant descriptions on this site and in the print catalog. lilies Tips & Growing Instructions Learn more in our How To Library

I planted some in the fall of 2018, they came up in the summer of 2019, absolutely stunning, I had them planted near a tree, they got so tall, I decided to transplant them in the fall of 2019, along with some more that I ordered, wow is all Im gonna say pretty hardy Lilly, they all came up this year so far, haven't bloomed yet as its still quite early, but I can't wait, this year they won't be hidden beneath my tree. They get rather quite tall. I'm in Northern Alberta, and if they can preform here like they do, they can surely grow anywhere! You won't be disappointed, just beautiful.
Beautiful color
Jun 2, 2019 | By Ganna Sokol

I like these lilies, though they are not so beautiful, as on the picture, but still they are gorgeous. Only one from five have had dabble flowers. Second year only for from five survived, but there are several new growing. It's a pity I can't post pictures of blooming flowers.
Elodie Lily
Apr 6, 2018 | By Kathleen Harris

This Elodie Lily is beautiful. I have ordered the Elodie Rose Lily for this planting season, if it is only half as nice as the Elodie, it will be amazing. Can't wait.
Wonderful Elodie lilies
Aug 17, 2017 | By wendy fafard

Our third year and these are so impressive. One stalk had 21 blooms. I have never seen such beautiful lilies and they have spread. They must be four feet tall and covered in blooms. Wintered well here in Sask
Elodie Lily
Jul 27, 2017 | By Emmy Pangantihon

Elodie lilies are very pretty and tough. I planted mine in a pot and squirrels kept on eating the stalks just as they come out of the ground. But they still grew so strong and had lots of beautiful flowers. I put my Elodie Lilies by our main door and everyone who pass by would comment how beautiful they are.
Beautiful.. not all are double
Jul 20, 2017 | By Sam

These lilies are gorgeous! Only one third of the ones I planted have double flowers but they are still beautiful and healthy. The ones with double petals are insanely pretty!
Not a double
Jul 18, 2017 | By Maeve

All of the '' Elodie'' I planted came up with lots of blooms on each stock.A bit disappointed as they are not a double lily as stated.Still,a lovely color, strong, long lasting.
Great colour
Jul 15, 2017 | By Rose

I really love the colour of this lily. It is a brighter pink than what you see in the picture It is like no other. Unfortunately on my first season, none of the lilies had double blooms. Still very nice. Hopefully next year.
Elodie Lily
Jul 28, 2016 | By Jessie Daly

I purchased the Elodie lily a few years ago. One of the best lilies that I have seen. Sadly two years ago the lily beetle got to it and I could not get rid of it. I managedto save a few of the bulbs and moved them to another area and this year a few of my llilies returned.
Stunning
Jul 9, 2016 | By Judy

Neighbours comment how stunning these lilies are. They come back every year taller, with babies.
Strong Performer
Oct 31, 2012 | By Mike

One of the best performers I've bought from Breck's. They're very hardy in Calgary. I planted five bulbs and they all bloomed in the first year, up to 4 feet tall! Two lilies had single blooms rather than double, but still very pretty. Otherwise they all looked just like the image.
Elodie Lily
Aug 3, 2012 | By Rosanna

These are without a doubt the most beautiful lilies I have ever seen. I have planted them 2 years in a row and it is just pure excitement waiting for them to finally open. If you are a lily fan or not these will make your garden and your day!!!!
Elodie Lilies
Jul 15, 2011 | By Nan Schmidt

The lilies came up and were absolutely beautiful. They looked just like the picture in the catalog. I am planning to order more.
Elodie lillie
Dec 10, 2008 | By Donna

The most stunning lillie ever. I have two small girls there names are Elodie Maple and Lillie Rose so as you can imagine the flowers are perfect.
Tougher Than They Look!
Nov 25, 2008 | By Rebecca

Not only are these very pretty, but they're tough! The year I planted mine the squirrels ate the stalks just as they poked through the ground. I thought that they were dead after that. The following year I had managed to scare away the squirrels and much to my surprise the Elodie Lillies came back and actually flowered!
Elodie Lilies
Oct 22, 2008 | By Maggie Burton

I have been growing lilies for several years and have never seen anything as spectacular as the Elodie Lilies - just an amazing showpiece and last beautifully as a cut flower.