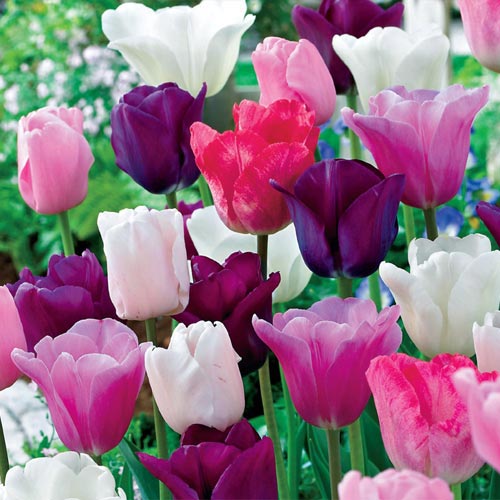 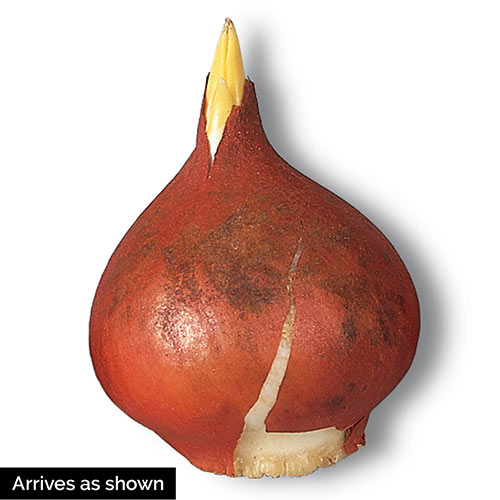 Colour scheme ripples with exquisite beauty.
Claude Monet's fabulous French gardens at Giverny were the inspiration for this artistic tulip mixture. Pure white tulips are punctuated with blooms of tulips in shades of pink and purple that mimic the impressionist palette. This composition of mid- and late-spring, 10 cm tulips lets you enjoy their lengthy bloom time.

Plant hardiness is very important to growing success. Check the map below to determine which hardiness zone you live in. You'll find zone designations at the end of many of the plant descriptions on this site and in the print catalog.

tulips Tips & Growing Instructions Learn more in our How To Library

Lovely tulips but I expected deep purples and pink. The tulips are more of a deep red than purple. Still nice, just not as expected.
Not quite as expected.
May 15, 2019 | By Mariefrance Manibal

I planted these last fall and they came up: mostly white (very large), a few deep purple (much smaller) and a few that have yet to open, at least a week after the others and they are going to be tiny (they are probably the pink ones). I wish the were all the same size and opened at the same time. Other than that, they still look nice.
What's not to love
Apr 7, 2019 | By Dorian

What's not to love about tulips in the spring! BUT I got a few parroty-looking tulips with maroon daggers up the center line of the cream-colored petals and some brilliant fire-engine red ones. Anyway, large, beautiful, long-lasting blooms, creamy whites, lovely pinks, deep burgundy, as depicted.
Big blooms
Jun 4, 2017 | By Tita Byuti

I planted in well drained soil- sun, part shade location. Only 18 came back and I had 9 whites, which bloomed first, then 9 (light and dark) pinks, which are about 6 inches taller than the whites, BUT no purple :( The blooms are really pretty specially the white ones which are so big and stayed shaped like wine glass for about 2 weeks. I can say the flowers are actually better looking than on the picture. They lasted for about 3 weeks.
Gorgeous
May 1, 2014 | By Leigh

The mix was exactly as pictures - simply stunning. Unfortuntely, I had serious slug problems the second year, so the effect was nowhere near as wonderful. I will defintely be ordering more for next year
Monet's Garden Mixture
Oct 1, 2013 | By Carol Foster

My color mixture was as pictured. They bloomed quite late in the Spring on tall sturdy stems and looked magnificent!
Beautiful
Sep 16, 2013 | By JenniferB

These were gorgeous and all the bulbs I planted came up. The dark ones bloomed first, so at first the mix looked very dark, but the pink and white ones did catch up before the darker ones had faded. I'm ordering more this year.
Monet tulips
May 25, 2013 | By Andy

Mine really did turn out just like the picture. My only regret is that I did not plant more.I planted 100 bulbs and never lost one. Will definitely reorder.
Colours aren't as described
May 1, 2013 | By M Winfield

The tulips I received are not true to the picture displayed, as mine are mostly white and burgundy. The tulips did perform well though.
Bad colour mix
May 26, 2012 | By Rachel

Love the colour of flowers, but they were all dark burgundy...not the mixed batch of pinks, purples, and white like I was expecting. The plant itself is really nice though, with 2-3 tulips coming up / plant.